Genworth’s target audience in Australia is a mix of business professionals and consumers. Getting the company’s digital content in front of multiple personas required a strong distribution strategy—and that’s exactly what Brafton brought to the table.

“The reporting has been really fantastic. We receive bi-weekly reporting, intro reporting and monthly reporting which has helped us understand who’s coming to our pages and what content is working.”

At first glance, LMI looks like an extra cost/another fee to pay for aspiring homeowners unable to put a 20% deposit down. But Kimberley Schepers, Marketing and Communications Manager at Genworth Australia, explains it differently.

“Our purpose is to help Australians get into their homes sooner,” she said, and it’s true.

LMI didn’t exist in Australia before 1965. Companies like Genworth insure home loans so lenders feel comfortable with the risk of giving a mortgage to people who can’t save a 20% deposit. It’s not the most scintillating product, but it’s literally the single reason millions of Australians are able to buy homes without putting their future on hold.

And for Kimberley, that’s just one of many important brand messages that she needed help promoting through Genworth’s digital channels.

“We’re a B2B company; the lenders, the banks, the mutuals are our customers,” Kimberley explained. “But the cost is paid by the borrower at the end of the day, so we’re really B2B2C.”

Then there are the brokers: approximately 60% of mortgages are sold through them in Australia, so that’s a third audience Genworth targets.

When you have as many target audiences as Genworth, it’s easy to focus only on one or more of them, which is what happened for Genworth.

“We didn’t engage with the borrower as much, and ultimately they are paying for our product,” Kimberley said. “We weren’t directly educating or communicating with them, and our lender customers were only being engaged through our Commercial Partnerships team and not through any digital channels.”

LMI’s price tag shouldn’t be the first thing an aspiring homeowner sees. Rather, they should know and understand the benefits LMI offers them, and how it helps them achieve homeownership goals.

Brafton’s first order of business was figuring out how to generate this high-level awareness among borrowers while still targeting lenders and brokers. We settled on a two-channel approach:

The first aspect was straightforward enough. We started creating posts like this for the borrower audience on Facebook: 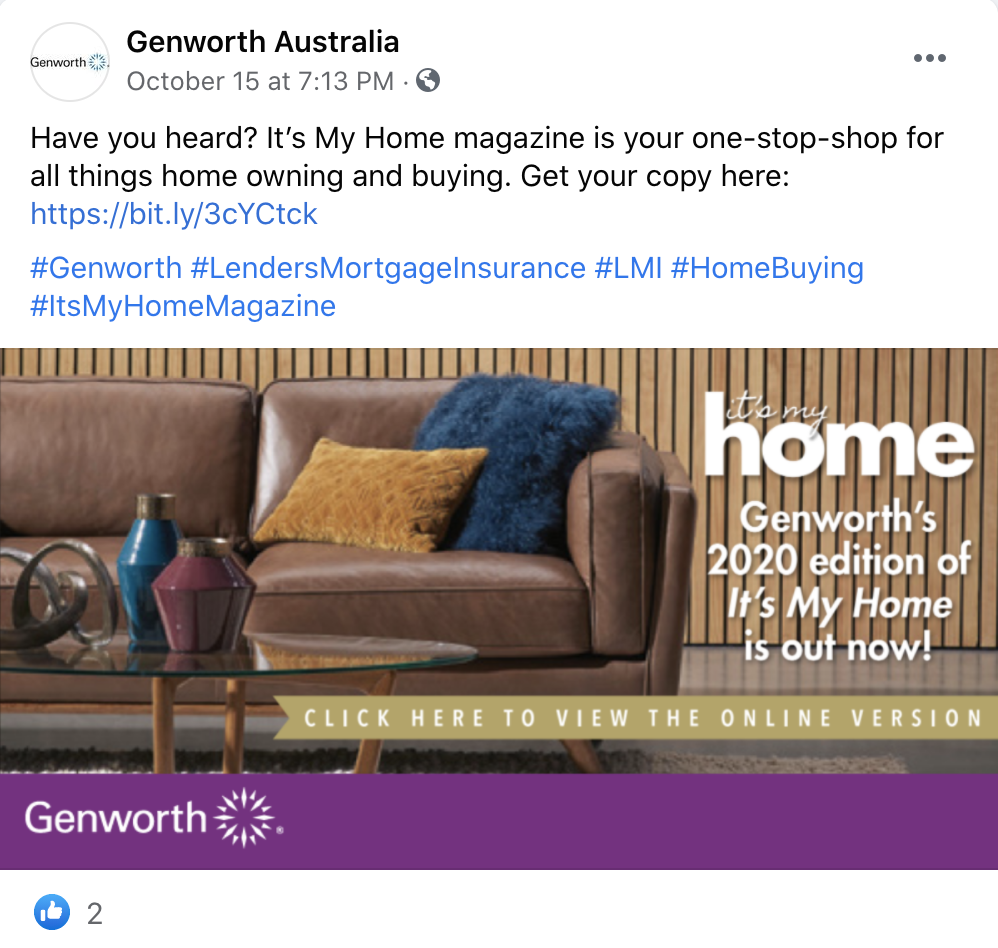 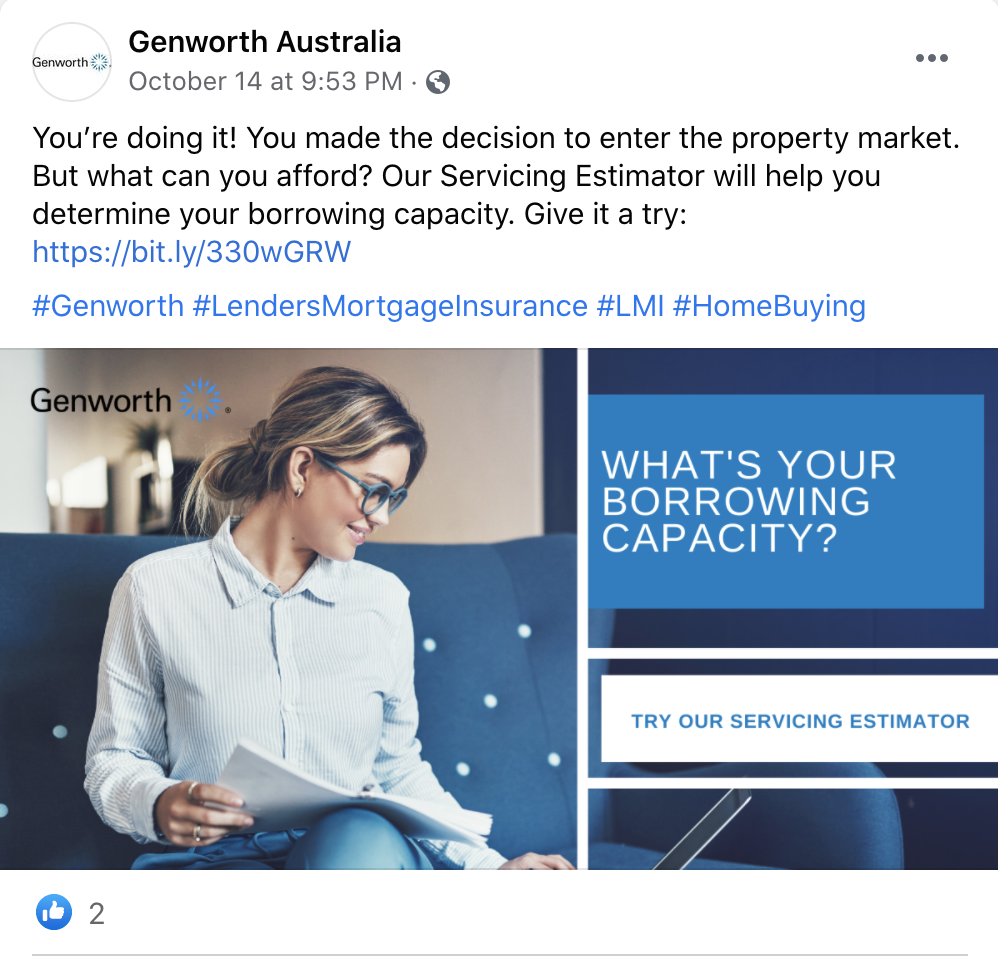 On the B2B side, we turned to LinkedIn. We reasoned that brokers and lenders are interested in any content that helps their client, the borrower. When framing educational awareness pieces on LinkedIn, we began promoting it as an asset that can help them engage homebuyers and win new business:

Here’s how we helped repurpose the Servicing Estimator, which we had previously shared for a consumer audience on Facebook, for a B2B audience on LinkedIn:

We also began boosting posts and managing paid ad spend across both networks.

Finally, and unrelated to our social strategy, we performed a website content audit for genworth.com.au. We used the results from that audit to create a mockup for a new potential site design that Genworth’s developers intend to use for a forthcoming site launch. 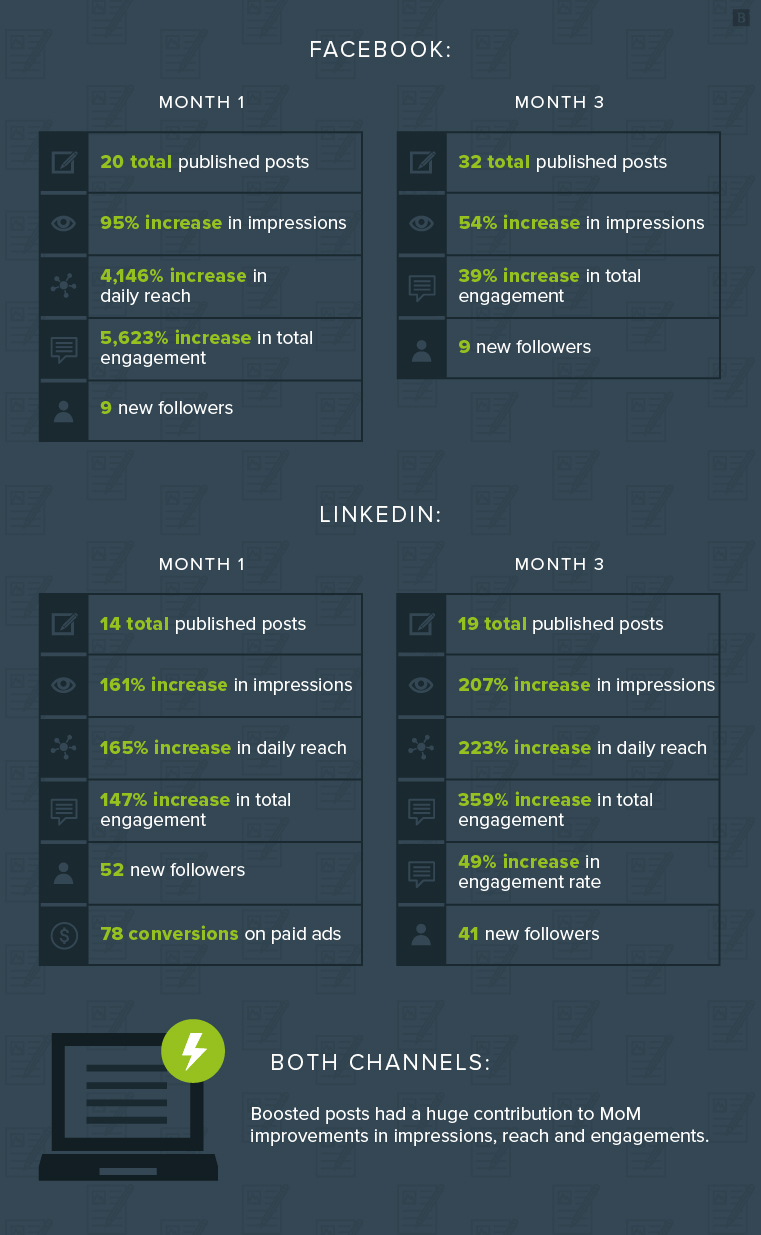 Impressions, reach and engagement skyrocketed by the end of month 1. This was expected given Genworth was starting from a low base. Before Brafton, Kimberley and Annette, Genworth’s Marketing Coordinator, had little time available in their busy schedules for social media posting. Social posting was sometimes as infrequent as a few times per month. Unsurprisingly, month 2 wasn’t as meteoric. Metrics were flat for both channels, and some even dropped slightly.

We recalibrated for month 3, however, and saw strong growth on both channels. LinkedIn, where Genworth’s most important commercial audience of brokers and lenders can be found, saw particularly promising results. Impressions, reach and engagement all increased by their greatest margin yet.

“Every time we have a question or need something changed the team is very responsive via email. They’re always asking what else they can do to help us and providing suggestions for improvements.”

The paradox of social media is that the more growth you see, the harder it gets to move the needle any further. Ensuring steady gains requires meticulous tracking and constant evaluation of the current strategy, which our team has helped with.

“The reporting has been really fantastic,” Kimberley said. “We receive bi-weekly reporting, intro reporting and monthly reporting which has helped us understand who’s coming to our pages and what content is working. I think being able to adjust is really the benefit that we’ve seen.”

“Every time we have a question or need something changed the team is very responsive via email,” Annette added. “They’re always asking what else they can do to help us and providing suggestions for improvements.”

As long as we stay that course, and we intend to, Facebook and LinkedIn will continue to be a valuable asset for Genworth as it helps bring its customers home.

We Generate 20% of PerkinElmer’s Life-Sciences Leads: Here’s How